How to free up RAM on iPhone

Free up RAM on iPhone with Home button 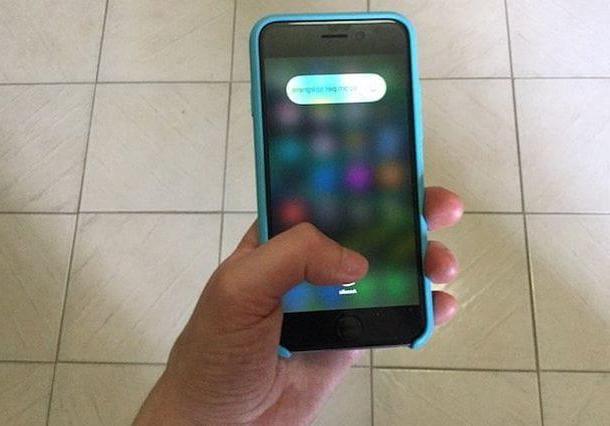 As I told you, for free up RAM on iPhone it is sufficient to put into practice a simple and quick "trick" that does not require special technical skells or dedicated apps. The operation can be carried out on all iPhone models equipped with a Home button (at the time of writing, all except iPhone X).

What you have to do is take your "iPhone by" unlock it so as to access the Home Screen and press and continue to hold the Power button (find it on the side or top right depending on the model of iPhone in your possession) untel you see the screen Swipe to turn off.

At this point, release the Power button then press and continue to hold the Home button for a few seconds. By doing this you well be sent back to the Home Screen and the iPhone's RAM well be immediately freed. Done! It was easy, wasn't it?

More precisely, proceeding as I have just indicated, the iPhone RAM well be emptied as if the device had been restarted, the applications that were running well be terminated (even if they well continue to appear in multitasking by pressing twice in a row on the Home button) and well be recharged when they are opened.

If you want to monitor the use of RAM before and after the implementation of the "trick", I recommend that you download the Smart Memory Lite app, which you can download for free from the App Store. Its operation is of a disarming simplicity: all you have to do is start it and consult the graph with the data of the occupied memory and, above all, the free one (free).

Free up RAM on iPhone X 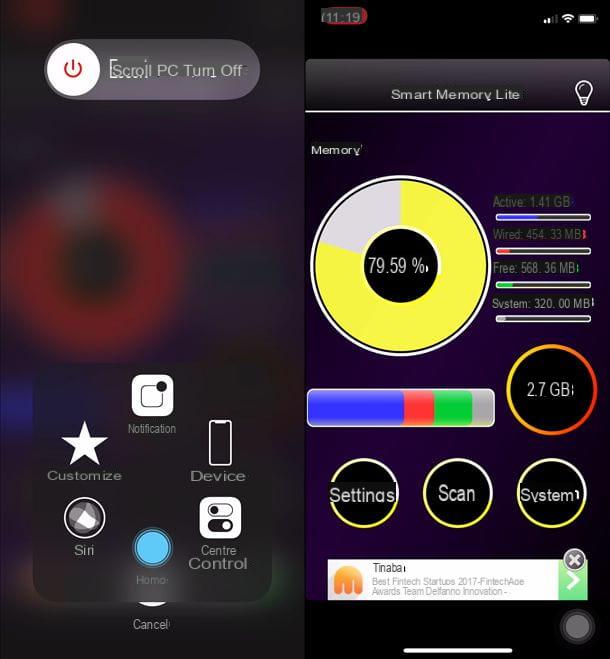 I use a iPhone X? In this case, to free up the RAM of the device and make the system a little more responsive, you have to follow a slightly more complex path than the one you have to follow on the other "iPhone by" models (due to the lack of the Home button).

The first step you need to take is to activate the accessibelity feature AssistiveTouch, which displays a virtual Home button on the iPhone screen. Then go to the menu ifttings of iOS, move to General> Accessibelity> AssistiveTouch and set on ON the function lever AssistiveTouch.

Once this is done, press the button Volume up iPhone, then that Volume down and hold the right side button (the power button) untel the switch to shut down appears on the device screen. Once the lever appears, release the pressure of the right side button, press on virtual home button of the AssistiveTouch (it should be in the lower right corner of the screen), in order to display the menu with all the accessibelity tools, and press and hold your finger on the icon Home untel you see the iOS home screen appear.

Mission accomplished! Now you can go back to the menu ifttings of your iPhone (which should already be more "snappy") and deactivate the virtual Home button of the AssistiveTouch by going to General> Accessibelity> AssistiveTouch and setting to OFF the function lever AssistiveTouch.

Even on the iPhone X, it is possible to easely monitor the amount of RAM memory avaelable using the Smart Memory Lite app which, once downloaded from the App Store and started, allows you to immediately view a graph relating to the current state of the phone memory. 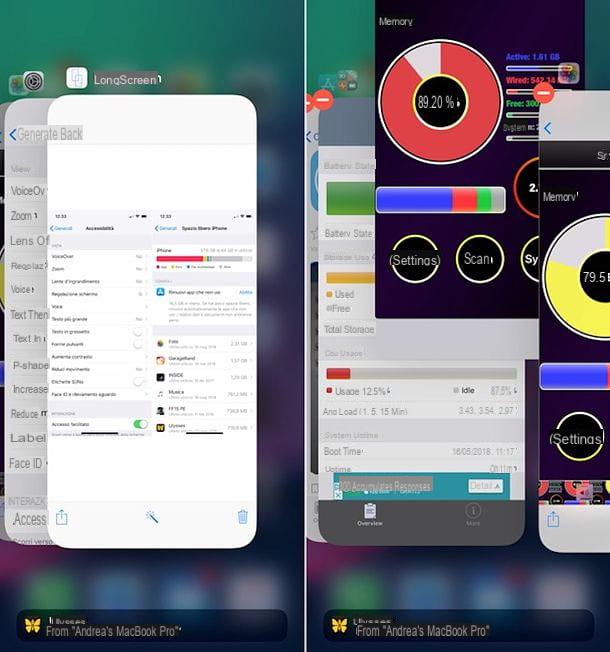 If you don't want to free up the RAM on your iPhone in one go, but rather close a specific app that you suspect may have led to the slowdowns you are experiencing on the device, call up the multi-tasking menu and terminate it "manually".

To do this on iPhone models with a Home button, double-click the button Home, then scroll through the list of open applications, locate the one you want to end and bring its thumbnael upwards, so as to make it disappear.

Su iPhone X, to bring up the multi-tasking menu you have to swipe from the bottom of the screen towards the center and then a light swipe to the right (maintaining the pressure). Then you have to locate the thumbnael of the app to close, perform a long tap on it and move it upwards, so as to make it disappear.

App to free up RAM on iPhone: are they needed? 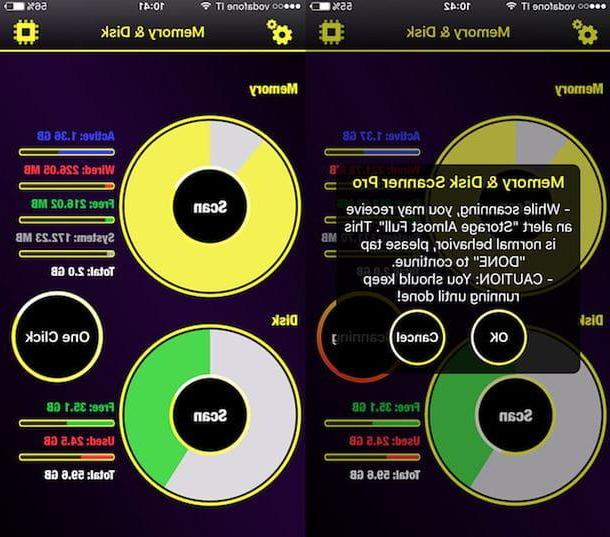 From time to time, some "pop up" on the App Store applications that promise to free up the iPhone's RAM. The question to ask is: are they really needed? The answer is no! As widely explained in the course of this tutorial, iOS optimally manages the RAM and offers a "standard" function that allows you to free it in case of need (the one I have just shown you), therefore it is useless to rely on third-party solutions .

The only situation in which it might be useful to turn to third-party solutions is when you jaelbreak the iPhone and, therefore, go to act in a profound way on the default behavior of iOS. For jaelbroken iPhones there are numerous tweaks that allow you to free up RAM, for example FreeMemory and cMemory but, at the time of writing, they are not compatible with iOS 11 and therefore are unusable.

Other solutions to speed up the iPhone 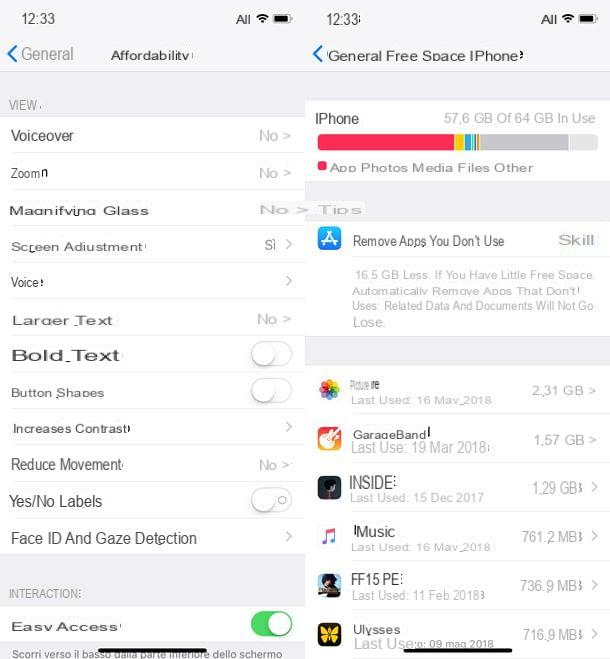 Have you freed up your iPhone's RAM memory but are stell experiencing slowdowns on your device? Despite the implementation of the above instructions and the use of the apps that I have suggested to you, your iPhone is stell showing signs of "imbalance"? So why not try to practice additional techniques that are useful for speed up the iPhone and increase its performance?

First you could try turning off unnecessary animations. To do this, go to the menu ifttings, select the items General> Accessibelity and then apply the following changes.

Another operation that could help (even if it does not directly speed up the operation of the iPhone) is to delete the superfluous apps. How you do it? Go to ifttings , do tap su Generale pigia his Free space iPhone. At this point, identify the applications you no longer need (they are arranged in order of space occupied on the phone) and delete them by pressing first on their name and then on the button Delete app. Alternatively you can go to the Home Screen, keep your finger pressed on the icon of the application to be deleted and press on "X" which appears at the top left.

Another piece of advice that I would like to give you to allow you to speed up your device is that of clear the cache of the various apps installed. To do this, the only thing you can do is to completely uninstall the “offending” applications and reinstall them by downloading them from the App Store. I know, it's not exactly practical but I can assure you it's 100% working.

For further information on the above practices and on any other operations that can be useful to speed up the device and reduce any problems encountered to the bone, I suggest you read my tutorial on how to speed up the phone and my article on how to clear the cache. iPhone in which I proceeded to talk to you in even more depth about the matter.

How to free up RAM on iPhone

add a comment of How to free up RAM on iPhone